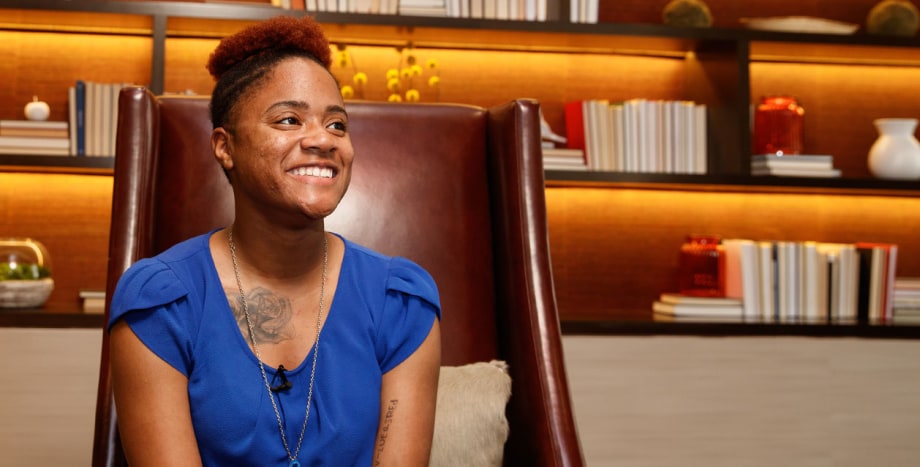 Mary was feeling defeated. She had recently lost her job cleaning trains and train stations, and she wasn’t sure how she was going to support herself, or even get the push she needed to find another employment opportunity.

Then she found Generation’s Retail Career Advancement program in Dallas. She hadn’t realized the program was an option to her, but once she did there was no turning back.

“I saw free and I saw an opportunity to learn,” she says. “Helping someone for free is something you don’t see, commonly. When I found out about the course, I had to hop on the Generation train.”

Doing so has changed her life. “I didn’t really have that ‘real’ motivation,” says Mary. “I had the idea and the idea would get me started, but it didn’t help me finish. With Generation, it gave me that belief in myself. I’ve always noticed everyone I’ve met believes in me, but I didn’t believe in myself enough to keep going.”

She does now though, thanks to the program and the skills it taught her. Those include specific retail-related expertise like customer service and sales tactics, as well as soft skills like time management and personal responsibility.

“I am more confident in my ability to do more and to grow,” she says. “And it’s made my mind greater. It makes me want to grow even stronger. So, it completely changed my life.”

While still a student in the program, Mary caught the eye of Rahim Saafir, senior human resources manager at the Hilton Garden Inn, Dallas. He was giving a tour for Mary’s Generation class and he quickly realized that she would make a great addition to his team.

“She is amazing. Truly amazing,” he says. “Great things are coming from that young lady.”

His instincts about Mary proved accurate. “You can just see her making a guest feel welcome,” he says. “She’s our little chatterbox. She’s always getting engaged in conversation. And I truly am looking forward to seeing great things from her.”

For Mary, this kind of belief in her abilities wasn’t something she experienced or expected much before enrolling in the Generation program. She grew up in a family that didn’t offer her much support and went through a lot in her teenage years, but she found a way to survive and move beyond her past.

“Generation is for those second chances or those extra chances, for those who didn’t get a great start and who thought that there was nothing left,” she says. “It’s for someone who knows there’s more. Or doesn’t see the light that everyone else sees. That was me. I didn’t see what everyone saw. Everyone else saw this girl who can do great things.”

“Everyone may have something in their past, but we can work through that. We can see through that,” says Rahim. “I see that confidence in her [now] when she walks in the door and when she’s trying to assist guests.”

Mary now has the follow-through she was lacking before Generation. “They broke me out of the shell that I didn’t know existed,” she says. “I knew I was a vocal person, but my fear always made me stand back. I always hid in the corner. And I know now I have a voice that carries, and I can do so many things.”

That includes succeeding in her front desk associate position to help her move up the hospitality ladder. “I see myself maybe being a general manager,” she says. “Anything that keeps me in the presence of people; anything that keeps me taking to them, making their day. My biggest success story would be, ‘I remember Mary. She did this one day or I spoke with her and she said this and it’s something I never forgot.’ My philosophy is impact one person, because that one person can go on and go on and impact someone else.”

Outside of her job, she’s also working on various book, film, and art projects and speaks to the Generation students following in her footsteps. “Any opportunity I have to promote Generation, I do,” says Mary. “They’re imprinted on me. You’ll regret not working with them.”

Rahim is on the same page. He got introduced to Generation through a previous relationship he had with Dallas partnership manager, Joshua Boyce. Through Mary was his first Generation hire, he expects she won’t be the last.

“As long as they welcome and want the partnership, we’re open,” he says. “I wouldn’t have it any other way. We’re always looking for talent—exceptional talent.”

The Hilton Garden Inn is one of the hotels in the lodging portfolio of HRI Properties, which works around the country. Rahim recently introduced Generation to one of HRI’s vice presidents. “We’re looking for opportunities and we’re always coming up in unique cities,” he says. “So let’s keep that partnership going. It’s got to go beyond Dallas, that’s for sure.”

Over 3,900 Kenyans graduate with practical skills for the labor market

Generation – Stories from around the World